Science award of the Hector Founda­tion II for profes­sors from Bremen, Munich and Dresden

Boetius explores the deep-sea and the polar regions. Her commit­ment in this field built bridges between biology, chemistry and geosciences. The profes­sor for geobi­ol­ogy for example studies how even the tiniest source of energy can efficiently be used to support life. In addition, she is partic­u­larly inter­ested in inter­ac­tions between geosphere and biosphere and devel­ops under­wa­ter technolo­gies for the obser­va­tion of the marine environment.

Klein is a prime example in combin­ing clini­cal medicine with funda­men­tal research on the treat­ment of children with rare diseases. His research focuses on diseases of the blood and immune system. In 2009 Profes­sor Klein founded the "Care-for-Rare-Founda­tion", to which he will donate part of his prize money. This founda­tion helps children with rare diseases all around the world, regard­less of their origin and their finan­cial situation.

Leo is one of the inter­na­tional leading scien­tists in the field of organic semicon­duc­tors. These semicon­duc­tors enable a variety of appli­ca­tions such as in organic light emitting diodes, which require very low voltages, increas­ing the efficiency of displays signif­i­cantly. Many of his research results have been recently imple­mented in the indus­trial field. 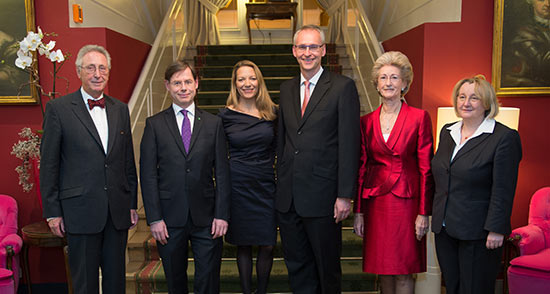 Back to the mediathek5